Have you or someone you know reached the milestone of a golden wedding anniversary? Fifty years of married life is a momentous occasion, and worthy of celebration, along with being marked as a memorable and unusual event. Marriage is a commitment, that unfortunately isn’t taken as seriously as in previous years, so this anniversary couple should feel very proud. A great way to mark the occasions is with a golden anniversary gift. One popular choice that we’ll be looking at is the gift of wedding anniversary vases. They make an exquisite and tasteful gift for such a special event.

Anniversary vases are a common choice when looking for a gift to celebrate the passing of another year of married life. Practical gifts have been given traditionally for an anniversary and vases perfectly fit the bill. But as well as being practical, vases are decorative too. Even the couple who have everything will find space for an anniversary vase and this is the sort of present that’ll be treasured and used for many years.

The theme for a 50th wedding anniversary is gold. Hence the name, a golden wedding anniversary. An elegant 24 carat gold-dipped vase makes for a classical gift and will be an ideal memento for any couple celebrating half a century.

Think you know all about vases? Let’s see if we can surprise you with some interesting information. 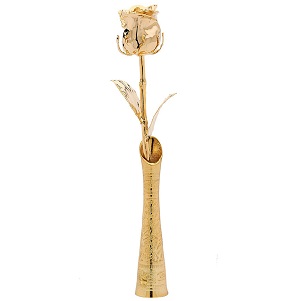 The history of the vase

So what exactly is a vase? Basically, and you’ve probably already got a good idea, a vase is an open container used to put cut flowers in. Going back in time, vases were used for water, wine, oil or for mixing and serving various liquids. They can be made from a variety of materials such as pottery or ceramics, metals that don’t rust such as bronze, brass , aluminium or stainless steel, wood, glass and other materials. Vases can be simple and plain, or highly decorated.

The anatomy of a vase
There are a number of specific characteristics that define a container as being a vase. At the bottom there’s the foot, which is simply the base. The base can be flat, bulbous or carinate. The main section of a vase is the body. On top of the body is the shoulder. This is the part of the vase where the body curves inwards. Think you know what comes next? Yes you’re right it’s the neck of the vase. This is where the vase can be given more height. Finally there’s the lip of the vase, which is where it flares out at the top. Sometimes there will be handles. This is the more conventional or traditional design of a vase. However, modern designs and shapes mean they’ve become more intricate and unique.

The history of vases is really quite fascinating. For thousands of years they have had both a functional and decorative purpose. The oldest vase ever discovered dates back three thousand years and was found in Mesopotamia.

In Ancient Rome they prefered to use crystal and glass
Vases were used in Ancient Rome to decorate their homes and were often made from crystal and class. Although the techniques used were very complex they were able to hone their skills and reach a high level of refinement. The methods they used such as gilding, staining, and enameling meant they were able to create some stunning work.

One very famous example of their finest work is The Portland Vase. Dated between AD 1 and AD 25, this a breathtaking example of Roman cameo glass and has inspired glass and porcelain makers from the 18th century onwards. It is currently on display in the British Museum in London, if you want to go and take a look for yourself.

Pottery vases made by the Ancient Greeks
Greeks are renowned for their pottery vases, produced from clay using a potter’s wheel and then finished off by hand. They were decorated by applying a layer of black paint and then adding brown, white, and red detailing. Some of the characters portrayed on these Greek vases were from popular tales, images of the gods they worshiped as well as striking geometric patterns. The vases were extremely ornate but surprisingly durable. Which made them perfect for everyday use in the home.

There are some fine examples of the Greek’s pottery that have survived and can be seen in museums all over the world.

Highly sought after examples of Chinese pottery
We’ve all heard tales of Ming Dynasty vases, and they are some of the most highly prized antiques today. Made from high quality porcelain, in a variety of interesting shapes and bold colours, these stunning examples of Chinese vases were being made as long ago as 202 BC.

While many of the examples of vases created throughout history will be a little out of your price range, that doesn’t mean you shouldn’t consider one of the modern alternatives. In the UK there are a number of manufacturers of top quality pottery, such as Wedgwood, and Poole Pottery, that produce stunning vases for your golden wedding anniversary gift. You may even be lucky enough to have an artisan potter in your neighbour, where you can go and buy a gift that’s totally unique.