How to Show You Care with a Golden Wedding Anniversary Rose

There is a very popular way to tell your wife how much she means to you and that’s by giving her a bouquet of flowers. Even a single bloom will convey the right message if you’ve chosen carefully. You might not have realised but flowers can be used to convey a number of different messages, not just those of love. Sympathy, support, apology and remembrance are just a few examples, along with flowers being used to say ‘thanks’.

There has been a language of flowers for centuries, known as floriography. Going back as far as the Ancient Greeks, Romans, Egyptians, and Chinese, who used flowers in their stories and legends. It was in the Middle Ages that flowers were first given as gifts. But it wasn’t until the mid 1700’s that the complete language of flowers came to Europe. French and English travellers visiting turkey discovered the language and it’s been in use ever since then. Saying it with flowers is not as popular as it was back then but we think it’s a gesture worth keeping. Flowers can be used to express emotions not all of us are comfortable are showing.

Buy your wife a rose for your golden wedding anniversary and there’ll be no confuse about what you’re saying. Nothing signifies love, passion and affection like a rose. Traditionally it’s been the ladies who look forward to receiving flowers but an increasing number of men are discovering what a great gift flowers can be.

And you shouldn’t worry if your fingers aren’t particularly green. 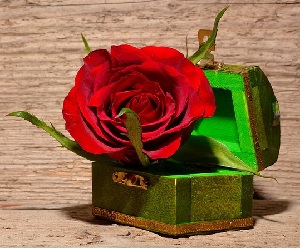 Cut flowers, in particular, have a tendency to fade and die really quickly, even with the best will in the world. And when it comes to growing flowers in the garden not everyone is blessed with green fingers. But this shouldn’t be an issue because there are some elegant alternatives from Eternity Rose. It’s a fairly new idea but one that’s catching on quickly. A single natural rose bloom can be given for a golden wedding anniversary gift and because it’s been carefully dipped in 24 carat gold, it’ll last a lifetime and far beyond. If you want to give your spouse golden wedding anniversary flowers spend some time looking at their site, because the quality is excellent.

There are quite a few reasons why flowers for a golden wedding anniversary gift are the best course of action.

If you’re thinking about a golden wedding anniversary rose bush rather than a bouquet you should bear in mind the following:

We’ve already mentioned that a golden wedding anniversary rose is a great gift to give, whether the recipient is your wife, a friend or family member. There are however, two particular flowers that are traditionally linked with a 50 year anniversary – violets and yellow roses. 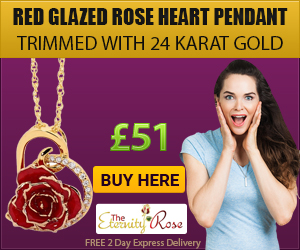 Not a lot of people know that violets are linked with a 50th wedding anniversary, even though they are considered the traditional bloom. Why violets? It’s been said that Josephine wore a string of violets when she married Napoleon. And every passing year he marked the occasion with an arrangement of this cute slower. Violets are also considered a symbol of virtue, modesty, and faithfulness. All three of which make them great for a 50 year anniversary gift.

Yellow roses are a popular alternative
Yellow roses have become very popular because few people realise the significance of violets. And violets are difficult to include in a bouquet whereas there is no such difficulty with roses, whatever their colour. The obvious tie-in with the theme of gold is their colour. But roses have long been connected with romance and love.

How to keep cut flowers looking their best for longer

Bouquets of flowers make a wonderful gift for a number of different occasions, not just as a golden wedding anniversary gift. Birthdays, Christmas, in fact almost any special occasion will be brightened up with a bunch of beautiful blooms. There is however, one small downside with giving a bunch of cut flowers. Their beauty quickly fades, especially if you bought them several days before the event.

Here are a few tips that will keep the bouquet looking fresher for longer: