If you’ve got a fiftieth wedding anniversary coming up you might be looking for the perfect 50th anniversary gift to give to your favorite lady. If you’re looking for a gift to show her how much she means to you then anniversary earrings may be just what you’re looking for. A stunning and elegant pair of earrings will be very appreciated. especially if they’re made from gold. Earrings have been worn for centuries and they don’t look to be going out of style any time soon.

Jewellery is often the choice for wedding anniversary gifts for her, and this half century celebration is no different. It’s particularly suitable for a 50th anniversary because the theme for this celebration is gold. Find the right style earrings to suit your wife’s taste and every time she wears them you can be sure she’ll be thinking of you. All the effort and thought you put into choosing them will be worth it.

If you’re pretty certain you want to buy your wife a pair of earrings, but are a little confused with all the choices we’re going to help by giving you as much information as possible. This will help you to make an informed decision, rather than picking the first pair of anniversary earrings you find. But first let’s look at where the ideas came from.

Historically, earrings were worn by men 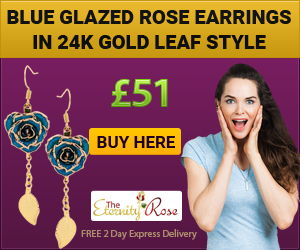 Earrings have long been a popular adornment for both sexes, but did you know that traditionally they were only worn by men? The piercing of ears is one of the oldest forms of body modification and there’s written and physical evidence from locations around the world. The earliest being carved images that were discovered in Persia. They showed Persian Empire soldiers wearing an earring.

It was found that Tutankhamen’s earlobes had been perforated. Which suggests that he wore earrings, but none were ever found inside his tomb.

In Ancient Rome it was slaves that wore the earrings, and in Ancient Greece earrings were worn by ‘ladies of the night’.

Earrings have come in and out of fashion for centuries, and in the 13th Century, the Catholic Church forbid the wearing of earrings. However there are always a handful of people who enjoy flouting the rules. And in this case it was left to thieves, lower classes and pirates.

In the 1590’s earrings once again became fashionable for men to wear, and we already remember childhood stories of pirates, who nearly always had an earring or two. Sailors pierced their ears as an indication they had crossed the Equator or sailed around the world. It was also considered to be payment for a proper burial, should they drown at sea.

As you can see, earrings have played a part in our daily lives throughout history, and we continue to carry on the tradition, especially when it comes to buying anniversary earrings for all the special ladies in our lives.

Anniversary earrings – Something for everyone

There are so many styles of earring that the right ones can be found whoever the intended recipient. However, there are certain styles that suit some more than others. They can be worn to both accentuate or detract from the shape of a person’s face. For example:

Let’s look at a couple of different styles and give you some options. 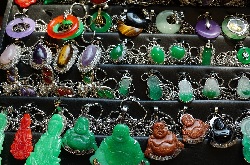 For the lady who prefers a classical look, stud earrings are perfect. Small and subtle, but with the option to become dazzling, stud earrings can add the finishing touch to any outfit. Whether dressing up to go out for dinner, or sat at home enjoying your evening meal. As gold is the theme for a 50th anniversary, it should be pretty obvious what you should be looking for. You get to choose from the different colours available, such as yellow, white, or red. And to pick from a plain set of stud earrings, but choose something with the addition of a precious stone. If you’re thinking that stud earrings are boring you’re wrong. They are available in different shapes and sizes, from simply balls, through to teardrops or knots.

Add a touch of glamour with drop earrings

Drop earrings look elegant and sophisticated, whatever they are worn with. Buy these for your wife’s 50th anniversary present and she’ll feel like a princess. They are an excellent choice for the lady who loves to feel and look sophisticated, and there are plenty of styles and design to choose from.

Anniversary earrings made from rose petals

One particular style we’ve been longing to mention are earrings made from the petals of a miniature rose. Natural rose petals are carefully glazed and given a 24 carat gold trim for an unmatched elegance.

We hope we’ve helped with this useful information, and your anniversary gift buying challenge is a piece of cake.